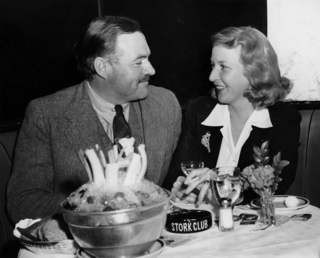 "Hemingway and Gellhorn" was released as an HBO special starring Clive Owen and Nicole Kidman, based on Jerome Tuccille’s book of the same title. The book explores Hemingway’s tumultuous marriage to his third wife set against the backdrop of the Great Depression in Key West, the first revolution in Cuba, the Spanish civil war, World War II, and the war in China. It is as much about their activities as intelligence agents and the great political and economic events of the period as it is about the two protagonists. This is the first book that goes into detail about Hemingway’s role as a spy for the U.S. government, discusses how Martha’s political passions played such an important role in the breakup of their marriage, and talks about Hemingway’s many extramarital affairs and his need to always have another woman in his life. The book examines Gellhorn’s affairs before and during their marriage and her true motivation for seducing Hemingway. Previous books have portrayed the protagonists in their roles as major literary figures. No other books on Hemingway and Gellhorn have dramatized them as political activists within the context of their era. Hemingway and Gellhorn depicts them as their lives evolved during the major political, military, and economic events of the time—the Great Depression, revolution, war in China and in Europe. Both writers were extremely political and committed in different ways to their political ideals. They were also highly promiscuous.

This book was the 2011 Gold Medal Winner for e-books in biography, awarded by the Independent Publishers Association's Jenkins Group.